Ambassador of India to the Hellenic Republic 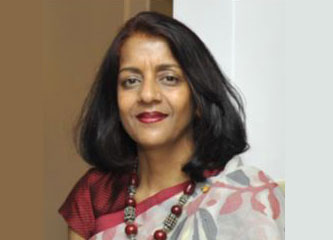 Ambassador of India to the Hellenic Republic

Earlier, she worked at the Ministry of External Affairs, New Delhi, as Joint Secretary in the Policy Planning and Counter-Terrorism Division, followed by a stint at the Indian Council of World Affairs, Delhi, one of the oldest think-tanks in India, declared as “an institution of national importance” by the Indian Parliament.  She has also worked as Director in the Division of South Asian Association for Regional Cooperation (SAARC) at the Ministry.

She has served in the Indian Missions in different capacities, including as the Deputy Chief of Mission in Italy, Minister in the Philippines, and Political Counsellor in Washington D.C. She has also held diplomatic assignments in Turkey, at the Permanent Delegation of India to UNESCO, Paris, and in Argentina.

She holds a double Master’s in International Politics from Jawaharlal Nehru University, Delhi. She was awarded an Honorary Doctorate (Honoris Causa) by the former President of Liberia, Nobel Laureate, Ms. Ellen Johnson Sirleaf, for her contribution to the promotion of India-Liberia relations.