Minister of Digital Policy, Telecommunications and Media of the Hellenic Republic 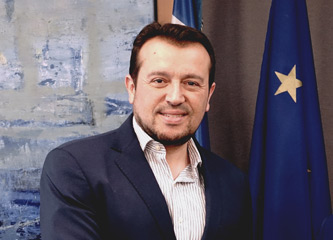 Minister of Digital Policy, Telecommunications and Media of the Hellenic Republic

Nikos Pappas was born in 1976. He lived in the working class suburb of Kesariani. He joined the Youth Structures of Synaspismos (the left wing Coalition Political Party) in 1993 and he was elected afterwards Member of its Board.
He studied and worked in Scotland for several years.
He taught economics and worked as researcher in various projects at the Fraser of Allander Institute – University of Strathclyde.
He was awarded a PhD degree in Economics from Strathclyde University.
Nikos Pappas held the position of the director of Alexis Tsipras office from 2008 to 2015.
In the (January 2015) general elections he was elected as Member of the Parliament in the Athens B constituency. He was re-elected in the general election of September 2015.
He served as the Minister of State from January 2015 until November 2016.
He is currently the minister of Digital Policy, Telecommunications and Media and he is also member of the Political Council of Syriza.