Minister of Infrastructure, Transport and Networks of the Hellenic Republic 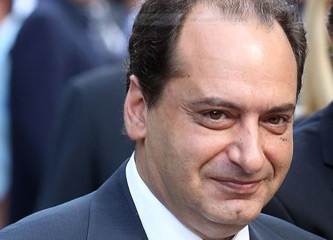 Minister of Infrastructure, Transport and Networks of the Hellenic Republic

Christos Spirtzis was born in 1969, raised, and is still living in Athens. He studied at the Electrical and Computer Engineering Department of the Polytechnic School of Democritus University of Thrace. He worked as a freelancer from 1995. He is married to Dimitra Foufri and has got two children, Panagiotis and Kallia.
His approach has always been to utilize Greek productive and scientific resources, and mainly the youth, for the restructuring and development of Greece and for improving citizens’ quality of living.
In September 2015, he was elected as Member of Parliament for SYRIZA, for the Second Constituency of Athens. Subsequently, he was appointed by Prime Minister, Mr. Alexis Tsipras, as Minister of Infrastructure and Transport and Networks.
-After the last reshuffling of the government, Mr Spirtzis remained as Minister of Infrastructure and Transport.
-In January 2015, he participated in the National Salvation Government, of the Prime Minister Mr. Alexis Tsipras, serving as Alternate Minister for Infrastructure, Transport and Networks.
– He was the Chairman of the Technical Chamber of Greece since September 2010 (two terms).
– He was Vice Chairman B’ of the Steering Committee of the Technical Chamber of Greece from 2007 to 2010, and was in charge of matters of Energy, Development, Employment, Social Security, Professional Licensing, Publications, Representation Ethics and Information Bank.
– He was a Member of the Steering Committee of the Technical Chamber of Greece from 2000 to 2003. He was also a Member of the Plenary of the Economic and Social Committee of Greece from 1999 to 2008, elected in its Executive Committee continuously from 2002 to 2007.
– He was appointed Supervisor of the Permanent Committee for Young Engineers of the Technical Chamber of Greece in 1996. He was first elected representative at the Technical Chamber of Greece at the age of 28.
As a student he was actively involved in the Student Union; he was a member of the Board of the Student Union of the Polytechnic School of Xanthi and of the Administration Bodies of the Democritus University between 1986 and 1993.
He was involved, both as a manager and as an engineer, in the drafting of development proposals and the implementation of development plans, regulatory frameworks and technical specifications in the following fields: production of works and designs, planning and operation of transport systems, ICT applications, promotion of integrated physical planning interventions, town planning restructuring, energy and structural upgrading of buildings, environmental protection and sustainable development, innovation, modernization of administrative structures and infrastructures etc. In his capacity as responsible for matters of Energy he contributed to the completion of the legal and scientific project for energy saving and the drafting of a long-term strategic plan on energy. He represented the Technical Chamber of Greece at social activities regarding free spaces, free access to beaches, and he was responsible for joint activities with other Agencies such as the Observatory for Natural Destructions, the Observatory for Road Safety, and the project of setting out a distinct Ministry of Environment and Physical Planning.