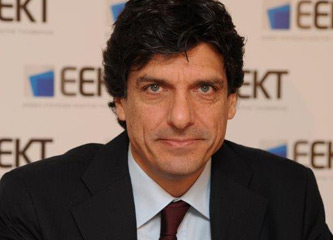 George Stefanopoulos is the General Manager of the Greek Mobiles Operators Association (EEKT), founded by Cosmote, Vodafone and WIND in order to (a) represent the Industry in Greece and abroad, (b) promote the contribution and prospects of mobile communications nationally and (c) promote licensing solutions to mobile providers regarding infrastructure.

In 1994 he started working at Vodafone (Panafon at the time) and as of 1995 assumed various positions, including member of the Vodafone-Panafon Management, reporting to the CEO and headed a number of company departments, such as Quality, Investor Relations, Corporate Development, International Growth, Regulatory Affairs and Strategy.

In the past, George Stefanopoulos worked in various positions in the aeronautical industry (Greek Aerospace Industry S.A.) and in the oil and gas industry (Consolidated Contractors Co, A.S Couppas and Co S.A.) in Greece and the Middle East.

George Stefanopoulos holds a Bachelor’s Degree in Metallurgy from the City of London Polytechnic and a Master in Science in industrial Metallurgy and Management from the Aston University, UK.