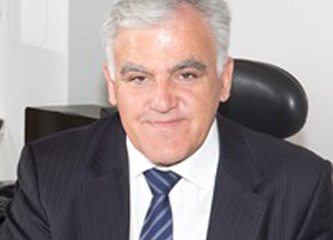 Mr. Tsokas was appointed Secretary General of the Black Sea Trade and Development Bank for a period of four years and assumed his duties on March 16, 2015.

Mr. Tsokas started his career in the private sector and held senior managerial positions in various Greek companies in 1990-2004. In 2004-2009, he served as Secretary General of the Region of Crete. In 2006, Mr. Tsokas was elected President of the Committee of Island Regions of the EU for a period of three years. In 2010-2012, he was CEO of the Hellenic Association of Automobile & Touring. In 2012-2014, Mr. Tsokas served as Secretary General of the Ministry for Development and Competitiveness. In October 2014, he was appointed Secretary General for Civil Protection of the Ministry of Public Order and Citizen Protection of the Hellenic Republic.

Mr. Tsokas has served as Board member in various state-owned Greek enterprises dealing with investment, trade and economic research. He represented Greece on the BSTDB Board of Directors for two years starting from September 2012.

Mr. Tsokas graduated from the Economics faculty of the Athens University and holds a Master’s degree in Business Administration and Computer Science from the University of New Haven, USA.

Mr. Tsokas is married and has two children.