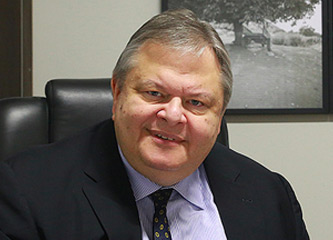 Evangelos Venizelos was born in Thessaloniki in 1957. He studied Law at the Aristotle University of Thessaloniki and continued with postgraduate studies at the University of Paris II, and PhD at the Aristotle University of Thessaloniki. He holds an Honorary PhD from La Trobe University Melbourne, Australia. He is Professor of Constitutional Law at the Aristotle University of Thessaloniki. He has been elected MP (PASOK) in the general elections of 1993, 1996, 2000, 2004, 2007, 2009, 2012 and 2015. He was a member of the Constitutional Αmendment Committee and general rapporteur on behalf of the parliamentary majority in the Constitutional Amendment of 2001. He is has been member of the Central Committee of PASOK since 1990 and of the PASOK Executive Office. He was Deputy Prime Minister and Finance Minister (June 2011 – March 2012). In March 2012 he was elected President of PASOK until June 2015 an served (June 2013-January 2015) as Minister of Foreign Affairs and Deputy Prime Minister. He currently serves as MP and Secretary of the Special Permanent Committee on Institutions and Transparency.