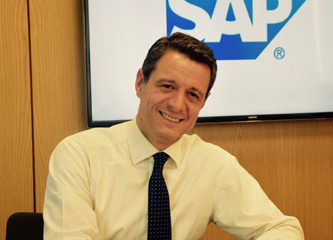 Andreas joined SAP Hellas in 1999 as Application Consultant & Presales Consultant. From 2002 until 2007 he worked as Sector Sales Manager in Manufacturing and Telecommunications.
In 2008 he assumed the Sales Director position for SAP Greece & Cyprus, with responsibilities in Direct and Indirect Business together with the Commercial and Relationship Management of the Ecosystem.
Since April 2016 his company entrusted him the position of Managing Director, for Greece, Cyprus & Malta.
Andreas holds a degree in Mechanical Engineering – Production Engineering from National Technical University of Athens.