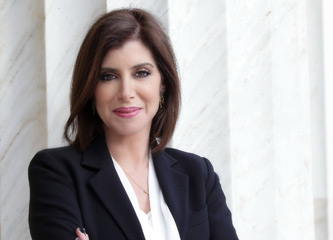 She studied Economics at Bryn Mawr College (B.A. degree) in the U.S.A., in the state of Pennsylvania, and Law, with a specialization in International Legal Relations, at Cornell University (J.D. degree) in New York State. She also studied at the London School of Economics in the U.K., at the Law School of the University of Madrid in Spain, and at the Institut d ‘Etudes Françaises d’ Avignon in France.

Anna-Michelle Asimakopoulou worked for several years as a lawyer in New York, specializing in financial transactions and international banking law. She is still a member of the New York Bar Association.

In the early 1990’s, she returned to Greece and became the Director of the EGNATIA EPIRUS Foundation, a non-profit organization established in the city of Ioannina, whose goal is to promote the integrated development of the region of Epirus through innovative activities compatible with the environment and the cultural heritage of the region. Since 1997, she has also worked as an evaluator and reviewer of projects funded by the European Commission and as a consultant in the private sector in Brussels and Luxembourg.