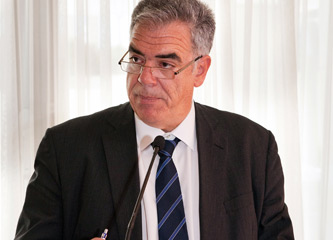 Dimitris Kourkoulas was the Deputy Minister of Foreign Affairs of Greece, responsible for European Affairs and Economic Diplomacy, from June 2012 till January 2015.

He has served as EU Ambassador in Lebanon (1997-2001), the first ambassador of the EU after the end of the war, Bulgaria (2001-2006), during the period of the negotiations for the accession of Bulgaria into the EU and Bosnia & Herzegovina (2006-2010), the third largest EU Delegation in the world.

He graduated from the Law School of the University of Athens and continued his postgraduate studies at the Universities of Bonn and Cologne in Germany.

He speaks English, French and German.